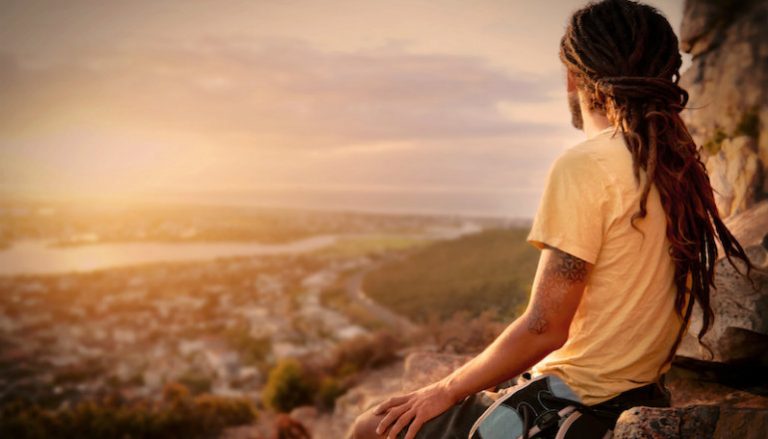 They drop in unbidden, leaving our intentions scattered, our priorities re-organized, and our convictions questioned. They feel implacable and unstoppable, the new permanent state.

You’ve experienced this at its highest magnitude: the request from your landlord that you vacate your apartment immediately, the sudden end to your long-term relationship, the loss of your job. You’ve also felt it as daily disruption: the dietary slip that leaves you in a sugar coma, the missed appointment that reshuffles your weekend plans, the mid-workout injury that waylays your perfect track record.

Left to fester, these wounds become infections. We remain alone for months, convinced that we’re not worthy of love. We end our pursuit of wellness, the injury untended, the single ice cream cone now a daily habit, the Friday night beer becoming a Tuesday night six pack. We avoid the job hunt, convinced that we’re unemployable.

With preparation, this can be avoided. A bad day can be set aside as just that, a short-term incident worthy only of tiny attention, something to be discarded rather than internalized, a stepping stone to greater things. The hand grenade can be thrown back.

Doing this requires mental strength, but that strength can be developed, borne of process rather than emotion. Below, your guide to getting it done.

We hold models in our minds of how things will go, rigidly constructed and highly detailed. We’ll get the job, land the big account, dazzle the boss, get the raise. We’ll meet the beautiful stranger, be wildly charming and attractive, realize compatible values, and settle down to lifelong bliss.

When these rigid schemas are disrupted, it comes as a surprise, an affront to our mental model. We fail to reconcile our desires with reality, and we fall into despondency.

This doesn’t have to happen. Instead of being surprised by these detours, expect them. Understand that your five-year plan will take seven, that your new diet will take a few weeks to become habit, that every first date may not be a prelude to marriage. Realize that roadblocks will arise, and goals are achieved via a circuitous path rather than a straight line.

By considering disruption to be part of any process, you’ll set yourself up to respond appropriately when it happens. Rather than fall into despondency, it will become a minor obstacle to be surmounted, and you’ll carry on without the corresponding emotional hit.

Ninety-nine percent of the time, a bad day is not the new normal. Nonetheless, our brains assimilate it as gospel, encoding the worst case scenario as a permanent state: “You’ve lost your job, and you’ll never work again.”

This strange (and destructive) quirk of self-talk is a roadblock, a barrier that leaves us unable to move on. To overcome it, we must recognize it for what it is: an emotional lie rather than a rational truth. Listen for it, and blast it with rationality.

The evidence of the lie is in your past. Look at your history, and see that you’ve always moved on. You’ve lost love and found it again. You’ve strayed from your exercise plan and returned to the gym. You’ve been professionally disappointed and come back to success. You always overcome eventually.

This serves as proof of resilience, positive indication that the current state is a momentary lapse, evidence of its impermanence. In this proof, you’ll find the hope you need to take the next step.

It is human nature to seek explanation. We want to know why things happen, and in that pursuit, we set upon the nearest rational explanation. In the case of misfortune, it is easiest to blame ourselves for any given incident, its occurrence a byproduct of our lack of character.

This manifests itself as absolute statement of self: “I lost my job because I’m not good with people.”

Rather than treat external events as the natural result of your character, recognize your character as a completely separate entity. When you hear yourself making causative generalizations, linking you directly to events (almost always including the words “I am” or “I am not”), grab a pen and write down an alternative explanation, unrelated to your personality: “I lost my job because James and I did not communicate with each other thoroughly enough or often enough.”

By taking your character out of explanation, you’ll see a path forward, and a preventative action you can take if the same situation arises again. Simultaneously, you’ll keep your sense of self intact, enabling you to move on.

Step 4: Embrace Your Power to Act

When things go off the rails, it’s easy to feel powerless, a victim of circumstance. This mindset leads to a reluctance to act, the sense that you must quietly await whatever comes next. Helplessness becomes internalized, and you become a passenger of fate.

This is overcome by a basic realization: in every situation, you have the option to act, the ability to do something to put things back on track.

Embrace this, and plan your next productive action. First, consider what might help, and break it down into the smallest possible step, knowing that you don’t have to solve everything at once. For instance, you can begin a personal reconciliation with an apology. You can move beyond your lost apartment by contacting moving companies. You can get your exercise plan back on track with a set of ten pushups.

In every case, you’re acting on the smallest possible level to create momentum. In doing so, you enable the cascade effect: one action in the correct direction reveals another set of possibilities, a path forward. This allows another simple action and then another, and one step a time, you’ll move beyond misfortune. You simply need to take that first action.

Bad days come when we least expect them, thunderbolts from a cloudless sky. In the moment, they can seem overwhelming, whether we’ve lapsed on our diet or had our entire worldview shattered.

Nonetheless, we can put them in their place, recognizing a bad day for what it is: something that occurs from time to time, an impermanent state that will soon be overcome through strength of action, another opportunity to build our character through trial.

Next time you’re confronted with a bad day, take yourself through action steps above:

Embracing this pattern creates resiliency in the face of adversity, perhaps the most admirable of human traits, and one that will serve you well beyond the current situation.

How do you get beyond a bad day? What lessons have you learned over the years that might help others struggling with misfortune? Post to comments, and lend your wisdom to those who might benefit.